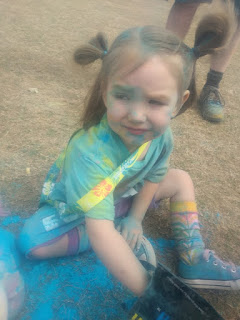 My daughter has thunder thighs. She has a double chin and a pot-belly. Her cheeks jiggle when she laughs. Her shins are covered in bruises and her knees are a cross-hatch of scratches and scrapes.
She doesn’t know that, someday, she will be told all of those things are bad.

Right now—today— she is two and beautiful. She smiles with complete abandon. When she laughs, she does it with her entire body.

And she laughs a lot. She thinks burps are funny and farts are hilarious. But it won’t be long before someone—someone well-meaning and with her best interests at heart—informs her that good little girls are sugar and spice and everything nice. Burps and farts belong to the realm of snips and snails.

Other things in that boy realm include primary colors. Green, blue, black, and grey. Jewel tones, earth tones, stark contrasts. Everything but pink— because that is a girl’s color— lives there. In that realm, there will be shirts with robots and dinosaurs. Astronauts, planets, outer space. Math jokes. Science puns. Superheroes. Monsters.

In the Pepto Bismol colored parts of the world, she’ll find pastels. There will be princesses and t-shirts that extol the virtues of shopping. There will be ribbons and lace. The sleeves will all be capped, ruched, and ruffled. Buttons will be rhinestones because diamonds are a girl’s best friend. The graphics will be lipstick tubes, compacts, jewelry. Whether or not she likes these things, they will be her main choices.

For no apparent reason, all of the superhero logos will have turned pink.

A fifth Teenage Mutant Ninja Turtle will have appeared. One with a pink bandanna and no weapons or initial on her belt. She’ll have a bow on her head. In an office building, there is a person patting themselves on the back for being so very inclusive over that one.

Straight-faced and with no animosity, a good person will tell my beautiful daughter that she could be so pretty if she’d only… if she’d just grow out her hair. If she’d just smile. Wear a dress. Be less aggressive. Be less bossy. Be quieter. Sit still. Just be less.

Before commenting on her intelligence, people will tell her how pretty she is. Because it will be more important for her to be pretty than smart. Or athletic. Or creative. Or loyal. Or generous. Or strong. Other adjectives will be bonuses, but ultimately unnecessary.

They will innocuously ask her if she really needs another piece of birthday cake.

They’ll tell her that she doesn’t want people to think she’s that kind of girl, right? It won’t really be a question.

A boy, sitting next to her in class, cross-legged and watching a movie near the end of the school year, in the summer heat, will look down and notice the peach fuzz on her legs. He will say it’s gross that she hasn’t shaved her legs. Even though he hasn’t shaved his legs. Even though he probably never will. He’ll shave his face someday, or maybe he won’t. And either option will be okay with most people.

My beautiful daughter will someday menstruate. She will learn to be embarrassed about buying tampons. She will compulsively check between her legs every chance she gets because of that time she bled through her pad and everyone saw. A person, doing what they think is best, will try to calm her down by suggesting that maybe she’s only upset because Aunt Flo is visiting. That whatever is bothering her, it really isn’t so bad. It's just hormones, not real emotions.

She will learn to speak in code. Doublespeak to keep from making people uncomfortable, including herself, about her body. She will be a magician—watch her left hand while she palms the sanitary napkin in her right.

She will have girlfriends and boyfriends, and some of them will be romantic and some of them won’t. Some will wish they were. A boy, who doesn’t know any better, who has been taught his whole life that a girl who says no is just playing hard to get, will get angry that she told him no. Someone will ask her what she did to lead him on. They’ll wonder what she was wearing. What color was her eye-shadow? What was she doing alone with him?

She will discover that girls can’t be funny because good little girls don’t make fart jokes. They don’t tie their skirts up around their waists so they can climb trees and dirt piles. They don’t wear revealing clothing. They don’t kiss anyone they don’t intend to marry and they certainly don’t go any further.

Those are rights held for boys.

Boys, who can laugh about burps and bodily functions. Who don’t have to worry about things like who can see up their skirts or if their belly is showing and, if so, is it flat enough. Boys, who can post pictures of themselves shirtless on social media. Who are encouraged to have sex. Lots of it. No matter the cost to themselves or others.

She’ll start to understand what it means when characters in movies say, “You were beaten by a girl.” She’ll get the jokes about women drivers. The silly, capricious emotions of girls. You throw like a girl. You hit like a girl. She’ll learn that what they’re actually saying is that she will never be as good as a boy. She’ll understand because, no matter how pretty or polite she is, she also has other adjectives. She is smart.

Someday, my brave/intelligent/curious/artistic/happy daughter will wish there was more space between her thighs. She’ll want a Photoshop figure and magazine-perfect skin. She’ll forget how to laugh with abandon.

She will learn that, even though she has to do it every day, fighting like a girl isn’t a compliment.

Listen to Me (Podcasts)

You're here, so you must like me, right? Don't make things awkward, just say yes. Oh, and sign for my email list. I promise I won't flood you with a ton of messages.