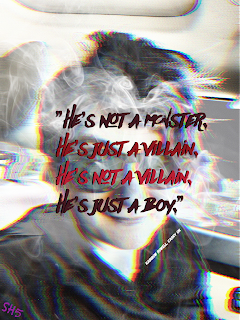 Surprising probably nobody, I was a weird kid. I liked horror movies and classic rock and wore overly dramatic outfits every day. But, like most kids born in the era of television, I consumed all of the requisite decade appropriate media. I learned a lot of things from TV and Movies. But the main takeaway was this: I’m the bad guy.

This lesson came in small ways. From my preferred color palette, to my favorite animal, to my musical tastes. She-Ra was full of amazing looking characters, but purple was my favorite color and I liked cats more than horses, so Catra was the clear winner for my affection. Sure, Jem and the Holograms, of the eponymous show, were cool, but for a kid with a burgeoning love of pop-punk and a near violent dislike for pink, The Misfits were everything. In The Breakfast Club Allison Reynolds only gets to be desirable and accepted after Claire Standish gives her a normie makeover. Side note, Bender got to kiss Claire, even though he still had paint in his hair and was wearing dirty clothes. No change required on his part (getting into how his abusive behavior absolutely should have been acknowledged and dealt with is a soapbox for a different article). But that probably has to do with male characters not being asked or expected to change. But I digress.
Being a preteen/teenager in the nineties was maybe a little better in terms of visibility, but the characters I identified with were still never good. Buffy: the Vampire Slayer’s Drusilla, with her love for the strange, was only ever accidentally or forced by a bigger bad on the side of good. Nancy Downs of The Craft in all her goth glory, was the ultimate evil in a group of lesser evils (more on her later). Weird girls did get Tim Burton movies, but they were still little more than gothic princesses, trading their pink for black and waiting for the right weird boy to come along and save them from the mundane. Or, more often, they got a life-changing makeover that made them normal (just a quick shout-out to 10 Things I Hate About You for being a rare gem that let Kat remain a shrew).
Marvel’s Loki, especially since he’s been canonically outed as bisexual and quite possibly genderfluid, has been a bit of a patron saint for the queer. There are so many of us who see ourselves in him. But, like, he is a villain. Queerness in villains seems like it happens a lot. The discovery that a bad guy is bisexual or gay is often revealed at a moment when the good guy is close and vulnerable in some way. The bad guy says something to make it clear they would be totally down for some sexual shenanigans. The hero is usually shocked and the whole thing is just a way to show how much the villain does not care about the rules of society. Male villains are so often portrayed more effeminately than male heroes. Female villains are allowed to be fat or loud or bossy. Sometimes all three if her name is Ursula.

Now let’s talk about trauma. Growing up for me was… rocky, to say the least. There’s a scene in The Craft where Nancy goes home. There’s a lot of shouting and Nancy deals with it like it’s a) normal and b)triggering her pretty hard. She goes to her room and lays on her bed to try to calm down, but it’s raining and there’s a leak in the roof. And all of this, in my opinion, gives us a pretty clear idea of how abusive and toxic Nancy’s home life must be.

All of the girls have perfectly reasonable desires. Bonnie wants to get rid of her scars, Rochelle wants racists to stfu, Sarah wants to be a part of a group, and Nancy wants… the movie never expressly tells us what she wants. But as a kid who was dealing with a lot of similar things at home, I knew. Not in a way that could be said with words, but in a way that could be felt and shared by showing the character.

But The Craft isn’t a movie about heroes. It’s about people driven to desperation. It’s about how they narrowly avoid becoming the villains. Except Nancy. Nancy, who is abused and traumatized and needs help, falls short of being able to stop when she’s finally given power. She is the ultimate bad guy that drives the others to pull back and become the heroes of the story. The others, who get to go on with their lives and smile and laugh while Nancy is literally tied up and sent to an insane asylum (I’m using that phrasing because that’s how we’re supposed to feel about it—it is not a mental health facility, she will not get better). It is shown as exactly what she deserves. Maybe even meant to be a little funny.

People like me, we learn to lie and hide part of ourselves. Even when we’re around safe people. It just becomes a habit. Almost every queer person I’ve met will sort themselves into Slytherin (JK Rowling being a TERF is yet another topic for a different article). I feel like it means something that a group of people who really only want to be seen as who they are so readily self-identify as the group that was meant to be the bad guys of the Harry Potter universe.

I get it. I get why they do these things. In The Little Mermaid, Ursula is an older woman of color (if not that, then a trans woman? She was based on the drag queen Divine) who doesn’t fit the mold. She’s a fat octopus in a world of svelte mermaids. Going to live in a cave to do magic with a little revenge on the side seems like a pretty reasonable response. She was probably never taught how to deal with people in any other way. They certainly didn’t treat her any better.

Anyway, it all culminated in this lesson: People like me are the villains. I am the bad guy.
I cried during the 2016 Ghostbusters. Full on ugly cry. I watched Holtzmann, with her weird clothes and macabre sense of humor, be a part of a group that never tried to change her. She seemed a little gay and that was fine too. Her strange tastes were, in fact, a boon to the group. She found their logo. She put together Ecto-1. She came up with their tech. She wasn’t played as a punchline, she got to deliver them. And I fucking when I watched her get a front and center cool fight scene because she was one of the good guys and no one was questioning that. Why was I in my thirties before I found a hero like me?

Listen to Me (Podcasts)

You're here, so you must like me, right? Don't make things awkward, just say yes. Oh, and sign for my email list. I promise I won't flood you with a ton of messages.